Another fantastic three days of racing, with a great drag race to start things off at the Paihia Power Paddle, then the short course (LOTS of corners!) multi lap racing of the Stone Store Stand Up, and then on the last day, a real treat in the form of some unexpected surf technical racing at Matauri Bay. Scroll down or click the links for the report on each individual event.

For the 30 competitors who completed all three days of the tour, the overall results based on finishing positions in all three events, were as follows: 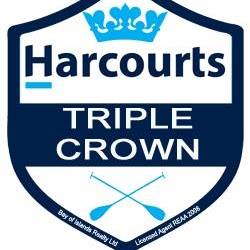 HARCOURTS TRIPLE CROWN DAY ONE – the Paihia Power Paddle
Day one of the Harcourts Triple Crown – a huge success!

Nearly 60 racers took part, unfortunately the conditions didn’t allow a downwinder but it didn’t stop some great racing. The 14’0 Raceboard fleet enjoyed a 9km jaunt from Waitangi Bridge along the Paihia waterfront, and then back up the Paihia inlet to Haruru Falls and back.

The Surfboard Class enjoyed a 3km race to Haruru Falls

Well done to everyone who participated!

Day two of the Harcourts Bay of Islands Triple Crown Series – a fantastic and fun day of SUP racing at the beautiful Kerikeri basin. A race for each fleet, multiple laps around a short course set in the basin, so spectators could see all the action. Some fantastic close racing in each fleet, lots of lead changes, super exciting to watch and just a whole lot of fun. Some crazy fancy dress costumes on the water too. A really great day of SUP fun, finishing with an excellent meal in the Pear Tree restuarant and a whole lot of dancing to great local band ‘late night meat sandwich’.

The Harcourts Opito Express – on tour!! With absolutely no wind forecast for the Monday, we decided to change the plan. Rather than a 9km slog from Opito Bay back to the Stone Store, which is undoubtedly scenic but not great for spectators (and the racers had already had done a 9km race on the Saturday), we relocated the whole competition to Matauri Bay, a wide expanse of beautiful east-facing beach 25 mins north of Kerikeri. The forecast was for a small swell from the east, and the opportunity to have a bit of proper surf racing, and enjoy another super scenic location, was too good to miss. A simple in-out course was set, and each fleet enjoyed two races, while the other fleet cheered them on. The 14’0 Raceboards went 4 times around the course, and the 12’6 Raceboards+ surfboards did 3 laps. The surf ranged from knee high to chest high, and was clearly enjoying itself too, regularly throwing in some mean sneaky close out sets just when the fleet was arriving at the inside mark. There were crashes a-plenty (fortunately nobody hurt and no boards busted), and lots of position changing on the corners – it was fabulous racing. Based on the combined results of their two races , the podium positions were as follows: